“One of the principal genres (subject types) of Western art – essentially, the subject matter of a still life painting or sculpture is anything that does not move or is dead.

Still life includes all kinds of man-made or natural objects, cut flowers, fruit, vegetables, fish, game, wine and so on. Still life can be a celebration of material pleasures such as food and wine, or often a warning of the ephemerality of these pleasures and of the brevity of human life.” http://www.tate.org.uk/art/art-terms/s/still-life

In France during the Renaissance the term “nature-mort” (literally “dead nature”) came to be used to describe the many layers of meaning in works that remind us of both the vitality of life and it’s ephemerality – the “ever present threat of death”. (Revisiting the Still Life , Micheal Petry, Nature Morte. 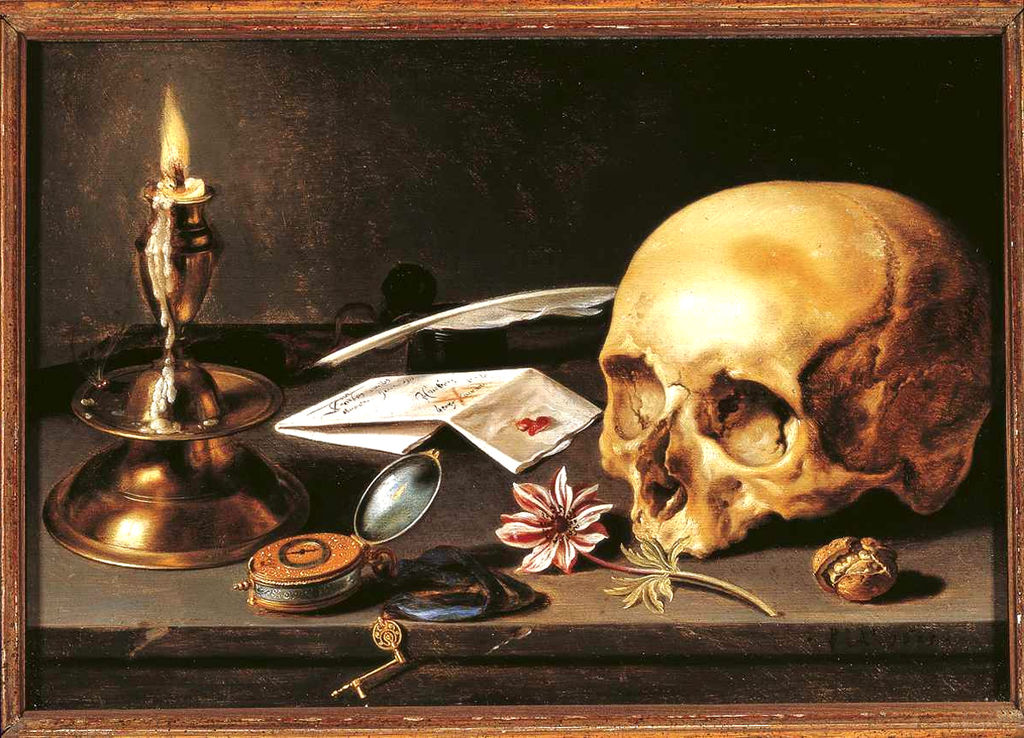 ” Not Still Short Life a single channel video work by Canadian artist Dean Baldwin which he describes as a contemporary reboot of 16th &17th century Vanitas paintings. Shot and produced in 2008 at The Banff Centre, it is presented here in Toronto for the first time, after a premiere in September 2012 in Montreal.

Like the traditional Dutch or Flemish oil, Not Still Short Life is a visual feast of overripe fruit, spirit bottles, glasses, swords and seafood arranged alongside commonplace objects, as offered to a party of guests at some affair or celebration.

Not Still Short Life features footage culled from hours of live tape which originally documented the indulgence and resulting actions of four individuals consuming a tableau of earthy treats in an evening’s conviviality. Eight minutes of footage is all that remains after the incidences of human presence within the frame of the camera have been removed. What lingers is an animated, playful and humourous memento mori of the unseen revelry that is anything but “still”.”http://katharinemulherin.com/dean-baldwin-not-still-short-life-october-13-28-2012/

See the Canadian artist’s site: Laura Letinsky: Say it Isn’t So series, and The Dog and the Wolf, and Fall

See the artist’s site: Laura Letinsky: Say it Isn’t So series, and The Dog and the Wolf, and Fall

In her vibrant images she pushes the rhetoric of abstraction to provoke questions about perceptual experience. “[Analog photography] doesn’t have to be intrinsically bound to the visible world,” she says. “It is full of possibility.”

As noted in the Guardian article, Eaton uses light the way other painters mix colours and her images offer referential nods to colour field painting and the likes of Bridget Riley, Josef Albers and Sol LeWitt. And while her images may look like they came out of a Photoshop experiment, they’re actually the result of technical expertise and “hit-and-miss, old-school technology.” https://finearts.uvic.ca/research-dev/blog/2015/02/17/visiting-artist-jessica-eaton/

In contrast, Eaton’s new series of floral subject matter, UVBGRIG (2014/2015), is close to home, more grounded in human subjectivity and art history. Each of the images in the series depicts the same subject: an ornate bouquet of flowers in front of floral wallpaper. Eaton’s approach to the new series is characteristically systematic. However, instead of using color filters on grayscale images, Eaton here separates out an incredibly noisy amount of color information, then adds multiple separations of top of one another. The results are not just strange but palpably impossible photographs that use the visual languages of both art historical still life painting and vernacular digital photography in the age of Instagram filters.

“The bouquets in her new series are based on floral displays present at the formal signings of dozens of agreements between nations and other dominions. They are part of the “stagecraft of power,” as Simon describes it—silent witnesses to the unfolding of world events. Using archival sources, Simon worked with a botanist to identify the various species in each bouquet. After ordering some 4,000 blooms from Aalsmeer, in the Netherlands (“the Amazon.com of flowers,” she says), she re-created and photographed them, surrounding the resulting images with heavy mahogany frames reminiscent of boardroom furniture.”

“In her work, Simon combines photography, text, and graphic design, in conceptual projects addressing the production and circulation of knowledge, and the politics of representation. For this latest project, Simon explores the stagecraft of power, examining agreements, contracts, treaties, and decrees drafted to influence systems of governance and economics, from nuclear armement to oil deals and diamond trading.” http://www.alminerech.com/exhibitions/3601-taryn-simon#prev

Works by Jimmy Limit – untitled and undated (recent to 2017)

Gabriel Orozco – on photography and objects:

“He frequently manipulates what he discovers by arranging found materials (a deflated soccer ball, cans of cat food, simple planks of wood) and photographing his constructions. Sometimes he transforms the ordinary just by suggesting a form in a seemingly banal image, as in Pulpo (Octopus, 1991), which bestows meaning on a tangle of pipes. Here the readymade is not so much a thing found as a dynamic and poetic interaction between artist and object.” https://www.guggenheim.org/artwork/4332

“In the 1950s and 1960s assemblage became widely used. Artists Jasper Johns and Robert Rauschenberg adopted an apparently anti-aesthetic approach to making art. They used scrappy materials and found objects alongside messily applied paint to create expressionist reliefs and sculptures, earning them the name neo-dada. Artists of the Italian arte poveramovement, such as Mario Merz, made artworks using an assemblage of throwaway natural and everyday materials including, soil, rags and twigs. Their aim was to challenge and disrupt the values of the commercialised contemporary gallery system.” From http://www.tate.org.uk/art/art-terms/a/assemblage

English sculptor, installation artist and photographer emerged as one of the major Young British Artists during the 1990s, with a body of highly provocative work. In the early 1990s she began using furniture as a substitute for the human body, usually with crude genital punning. In works such as Bitch (table, t-shirt, melons, vacuum-packed smoked fish, 1995), she merges low-life misogynist tabloid culture with the economy of the ready-made, with the intention of confronting sexual stereotyping.- http://www.tate.org.uk/art/artists/sarah-lucas-2643

Bitch, Sarah Lucas, 1995. Wood, enameled metal, cotton, synthetics, smoked fish and plastic (80,5 x 104 x 67)Lucas’s [work] is both enormously enjoyable and awful: awful because much of what she shows us about our relationship to the human body and our psyches is as grim as it is hilarious – the toilet as an extension of the human digestive tract, as receptical not just of waste but of parts of ourselves, dark thoughts as well as dark matter. She can bring us up short: a cigar and a couple of walnuts are balanced on the rim of a begrimed loo. I imagine the smell of the cigar and the taste of walnuts. It’s stomach-churning.- https://www.theguardian.com/artanddesign/2013/sep/30/sarah-lucas-whitechapel-gallery

“Essentially, Au Naturel is a very simple sculpture of a man and woman in bed, he represented by two oranges and a cucumber, she by a bucket and a pair of melons. What  makes this work for me is that the visual joke of the assemblage triggers thoughts about language and the slang terms used for body parts. In particular, with works like this, Lucas draws attention to the derogatory way women’s bodies are often described colloquially.” https://imageobjecttext.com/2012/08/19/the-assembled-body/

‘In Two Fried Eggs and a Kebab, Lucas makes the terminology explicit in the title as well as the work and uses a propped up photograph of the table top to make the face that completes the female form. Thus the woman is seen only in terms of breasts and vagina, an anonymous headless form who is, literally, part of the furniture.” From https://imageobjecttext.com/2012/08/19/the-assembled-body/

Beyond the Pleasure Principal, Sarh Lucas 2000.

“Creativity in Britain doesn’t shy away from the fact things can be shit, but also funny; and that sex itself can be ludicrous and silly.” From https://www.itsnicethat.com/articles/british-creativity-is-messy-and-punk-as-sarah-lucas-toilet-vaginas-prove

“Explores themes that transgress and threaten our sense of cleanliness and propriety particularly referencing the body and bodily functions.”

“The strangeness of the shapes sometimes gives the work a look of abnormal scientific discoveries combining unknown minerals and molecules. De Joode’s work, as the result of an alchemy between raw material and the artist’s brain, is to be auscultated and dissected; it is porous, filled with cracks, abstract surfaces, giving way to the mysterious and extra-terrestrial.”

“Rachel de Joode is constantly seeking for raw substances, oozing pastes, or anything flabby but particularly photogenic that she will then tame with all the technological tools at her disposal. Going as far as a trompe l’œil, her pieces play with the ambiguity between 2D and 3D, between photographs and objects, that tends to make reality a little more artificial.”

Ai Weiwei 艾未未 is a Chinese contemporary artist and activist who is highly and publicly critical of the Chinese government’s stance on human rights.

Having spent his formative years as an artist in New York in the 1980s, when… conceptual and performance art were dominant, he knows how to combine his life and art into a daring and politically charged performance that helps define how we see modern China. He’ll use any medium or genre—sculpture, ready-mades, photography, performance, architecture, tweets and blogs—to deliver his pungent message.

Ai’s persona—which, as with Warhol’s, is inseparable from his art—draws power from the contradictory roles that artists perform in modern culture. The loftiest are those of martyr, preacher and conscience. Not only has Ai been harassed and jailed, he has also continually called the Chinese regime to account.- Mark Stevens, http://www.smithsonianmag.com/arts-culture/is-ai-weiwei-chinas-most-dangerous-man-17989316/?no-ist

Study ofPerspective (1995 to 2003) is one of Ai Weiwei’s most controversial series, where he photographs himself flipping off important monuments around the world. He describes it as his personal form of rebellion against any government authority who blatantly or covertly disregard the freedoms of its citizens.

There can be a powerful assertion behind a single gesture when used in the proper context. With a raise of his middle finger, Ai champions the social responsibility and individualism of the generation, and shows just how fragile the powerful can truly be.

“There are no outdoor sports as graceful as throwing stones at a dictatorship.” says Ai Weiwei in an interview with BBC Radio 1 – http://www.theplaidzebra.com/that-time-ai-weiwei-flipped-off-the-worlds-most-important-monuments-to-prove-a-point-photos/

Ai Weiwei’s Sunflower Seeds is made up of millions of small works, each apparently identical, but actually unique. However realistic they may seem, these life-sized sunflower seed husks are in fact intricately hand-crafted in porcelain.

Each seed has been individually sculpted and painted by specialists working in small-scale workshops in the Chinese city of Jingdezhen. Far from being industrially produced, they are the effort of hundreds of skilled hands. Poured into the interior of the Turbine Hall’s vast industrial space, the 100 million seeds form a seemingly infinite landscape.

Porcelain is almost synonymous with China and, to make this work, Ai Weiwei has manipulated traditional methods of crafting what has historically been one of China’s most prized exports. Sunflower Seeds invites us to look more closely at the ‘Made in China’ phenomenon and the geo-politics of cultural and economic exchange today.

A short documentary about the process of making Sunflower Seeds can be found here.