Scott King is a British artist born in 1969. King trained as a graphic designer and his work showcases an interest in how iconic images can be used as symbols to communicate information when detached from their original meaning. His interest in iconography can be seen in the following works: 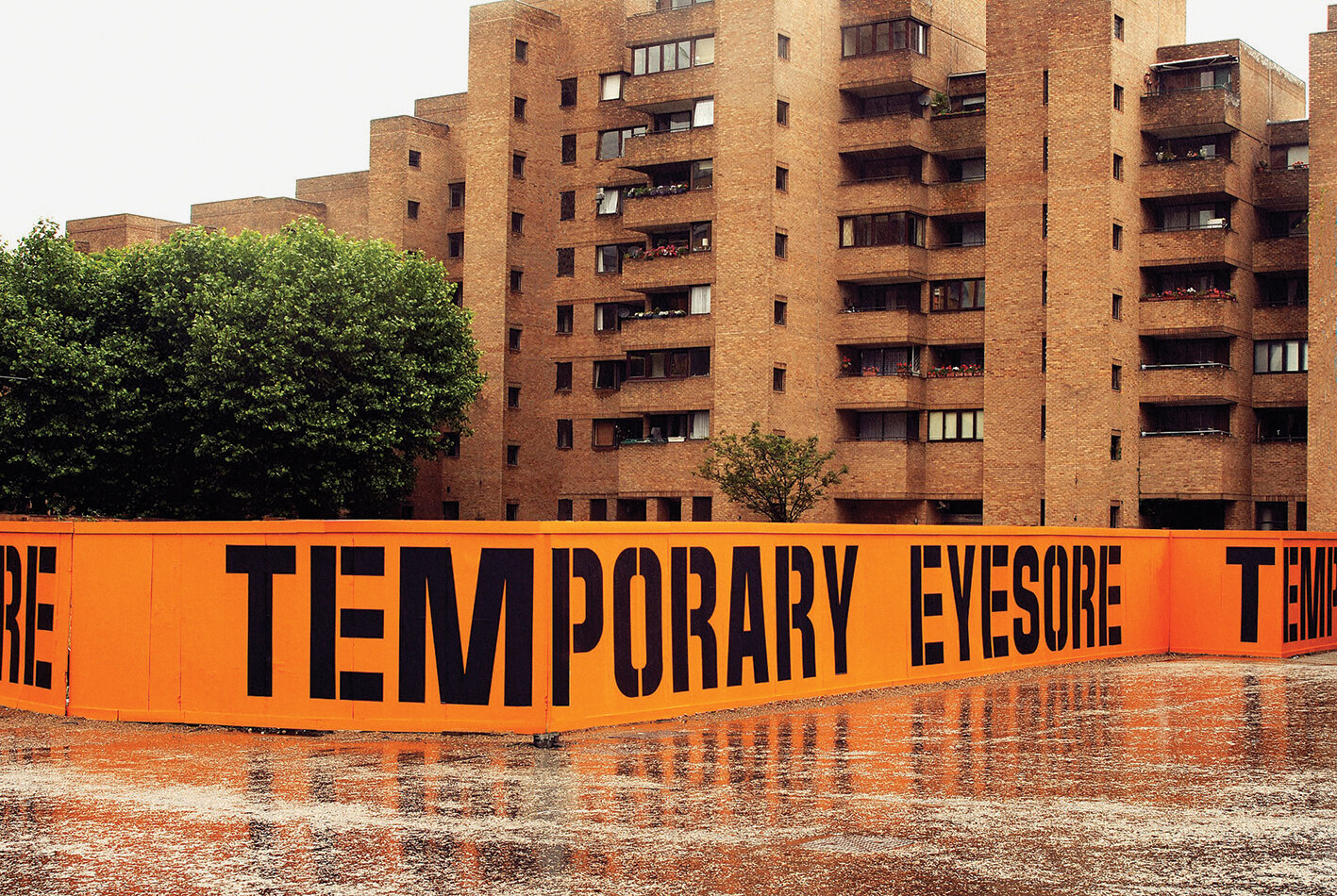 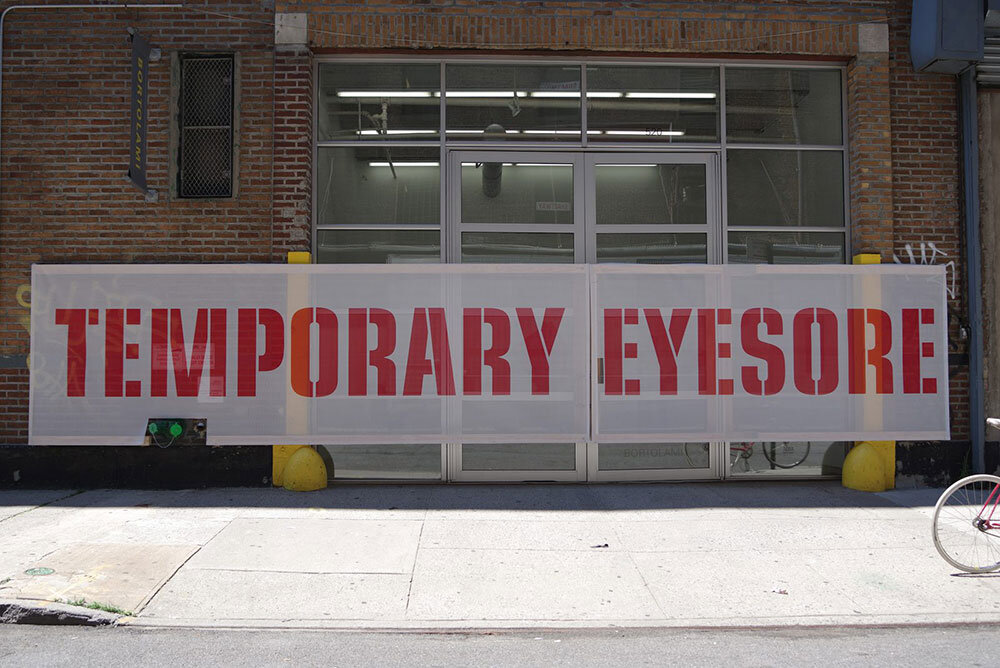 Temporary Eyesore, in I Beam U Channel, Bortolami, New York, 2016.

Temporary Eyesore is a hoarding exhibit commissioned by the Architecture Foundation in association with Tate Modern. The goal of the 2008 project was to ‘transform this temporary and unsightly hoarding by means of an artwork”. The design was adapted into a ‘mesh hoarding’ for the 2016 I Beam U Channel group exhibition in New York. Hoarding exhibits typically aim to display public art that removes the unattractive aspects of construction, yet King decided to diverge from that approach. This conceptual, text-based work provokes a feeling of industrialism that calls the viewer to pay attention to what the piece itself actually is: a construction hoarding. Aspects of Temporary Eyesore including the contrasting colours, bold text, and the use of hoarding material communicate a sense of caution, especially because similar colours, text and material would be found in construction zones. The words “temporary eyesore” are cynical, while also ironic when placed into the context of art. The technical and conceptual aspects of this piece work very well together, contributing to both my personal taste and the success of the piece. 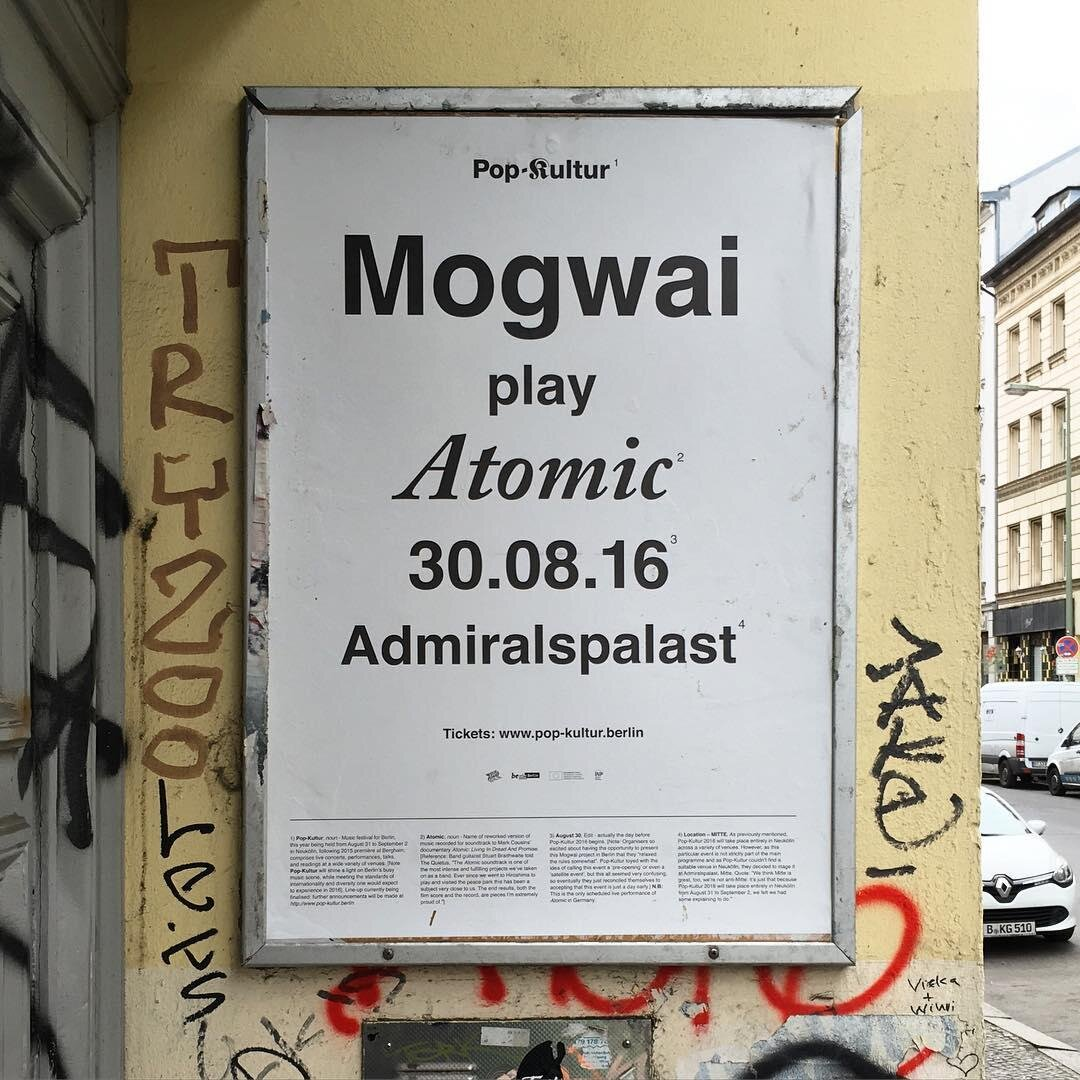 This piece by Scott King is a poster for a performance by Mogwai at Berlin’s Pop-Kulture festival in August 2016. The festival organizers’ goal was to overfill the poster with explanatory information, which King decided to implement as a design feature. The black text on the white background is reminiscent of a book or magazine, especially with the use of the footnotes featured at the bottom of the poster. The various fonts and text sizes create a diverse visual experience without causing too much distraction or obnoxiousness. The poster creates a feeling of confusion because there is so much information to take in, but when looking closer at the footnotes it is clear that the information listed is promotional rather than educational. King uses font, colour and material to his advantage when communicating through text-based work. The magazine-inspired look is attention-grabbing, and the overfilling with text is humorous and effective when read more closely. This text-based poster work is effective at drawing in interest through curiosity, as well as providing an artistically effective pastiche to this literary style.